The Death of a Man

The Death of a Man

My sister can look at a man and see if
the shadow of his death colours his face.
The folds of his wrinkles he earned from the sun,
black like his hair, blacker than his teeth—broken,
blacker than the hole where he digs for gold
for a man not black like him.

He buried his mother in the mountains
where his wives buried their names,
where his daughters birthed their sons
and his sons swallowed their hunger.

My sister can look at a man and see if
he woke too late for the train to the mountains.
The folds of the hills have swallowed the tracks,
the way home.
He crouches in the shack and sighs:
Shami, you are a good woman. If
the ancestors do not take me
I will make you a wife.

If the sun rises too many summers and
his blood becomes thin from
the foreignness he swallowed,
my sister can look at the man to see if
the shadow of his death will free her today. 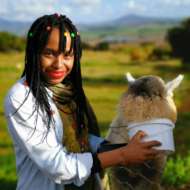 Heaven Is Not That Far-away

YOU DO NOT KNOW WHEN YOU ARE GONE