YOU DO NOT KNOW WHEN YOU ARE GONE

“Cake is the answer. Who cares what the question is?”
That is the first thing you notice about her- the cursive inscription on her shirt.
You smirk.
But there’s more.
Her friend says something funny and she laughs.
Your heart skips a bit. Her laughter is light and soft like a breeze.
She reminds you of Bisola.
Your fingers turn into a fist and your smirk turns to a scowl.
How dare she? How dare she remind you of someone so pure and unique?
Your friends at the table notice you staring at her.
“Baba, go and get her number,” Moshood says, his hand reaching for another slice of The
Governor pizza.
You scowl at him. He knows that part of your life is over, and you want to hit him. He knows
how it went with Bisola and that you are not ready for a relationship.
But you can’t help it. Miss sweet-stuff has awakened you.
Besides, it’s not a relationship you are after.
You get up and approach her and her friend. They’re at the counter awaiting their order.
“Hi.”
Her friend instantly falls for you, you can tell. “Hi,” she says.
Your target, on the other hand, gives you a polite smile, already wishing you were gone. 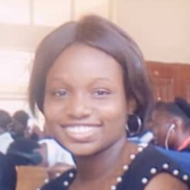 Nneoma Mbalewe is a law student of University of Ilorin, Ilorin. She is passionate about writing and sees a story in every incident. She can be found on Instagram at @callme_nonye.

The Guest who didn’t know